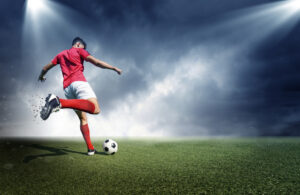 You may not find a sport which is as massively popular as the soccer no matter wherever you may go in the world. According to an estimate, this massively popular game has enormous fan following throughout the world whose craze dominates over almost half of the world’s populous. We are divided by nationalities, borders, colors, continents, races, oceans and may even have different views about thousands of things. But when it comes to soccer, then it wouldn’t be wrong to assume that the entire human race is one and united on the viewpoint that there is no better sport than Soccer.

The Game of Legends

An expert of soccer, Avram Grant, explains the game of soccer in his own words. According to him, soccer is a game of legends, some of whom we have heard, some we had seen while some are still dominating the soccer fields. The expert believes that soccer is a game for all and if a player is exceptional then there is a window of opportunity for him or her.

The game of soccer is privileged to have players like Cristiano Ronaldo, Lionel Messi, Mohammed Salah, Karim Benzema, Robert Lewandowski etc. All of them are so good in their own styles that they are living legends and whose name will never be forgotten in the history of soccer, especially of Ronaldo and Messi. Who is the best of the two is a question which is so far an unsettled question. Both of them are exceptional players with tremendous records and achievements to their credit. They are inspiration for others who want to follow in their footsteps but know this, they have worked so hard to achieve their places amongst the soccer legends.

Here are some useful tips and tricks which can be used by a soccer player for advancing his soccer skills towards becoming an exceptional player.

Avram Grant believes in sheer hard work. In this hard work, a player must ensure waking up early and start his training routine immediately after warmup. First of all, the player would need to improve his or her fitness and for that inspiration could be derived from players such as Cristiano Ronaldo and other like greats. However, the player would need to have the will to be exceptional coupled with sheer dedication and commitment as well as enthusiasm. On the other hand, it is through learning and practicing hard, which can produce the needed results for becoming an advanced soccer player.

From the training and practicing point of view, it is must that the player is aware what is the right kind of training and practice he or she needs to focus on. For Avram Grant, there are three key areas which have to be mastered by a player if he or she wishes to be an exceptional player. The three key areas are bettering general soccer play, focusing on foot skills and thirdly and lastly improving the fitness.

One of the best techniques of developing your soccer playing skills and mastering your own style of play is to play soccer as much as you can. For that playing with friends, teammates or club level soccer are the best options. In this connection, help can be sought from a qualified coach for guiding you what kind of training you need to focus on. Joining teams in your localities for participating in local soccer competitions and tournaments is also very good for improving your skills and nurturing solid character of a player.

In addition, you need to identify your weak spots which is necessary for you to give them further attention. During your general play, try of focus on improving your weak spots. Even in the spare times, you can practice alone specifically for improving the areas where you feel you are weak.

Foot skills can be improved through dribbling, exercises involving soccer ball handling, ball passing, working on a few advanced moves and by strictly following training schedules. For the purposes of improving your dribbling, one must focus on obstacle courses and juggling. If you have cones available with you then set them up in zig-zag order and then dribble the soccer ball through the objects without touching the obstacles. On the other hand, juggling gives you the power to control the soccer ball although it is not necessarily used in-game. Juggling the soccer ball in the air 10-times in a row to begin with is good enough. Try to use your legs initially and when improvement is achieved juggling can be increased with the inclusion of head, chest and back.

Fitness is necessary in life and it is essentially critical in the game of soccer. Usually a soccer match lasts for 90 minutes which is divided into two plays of 45 minutes each. So the ultimate aim of a soccer player should be to achieve a fitness level which can ensure 90 minutes of continuous play. Your focus would be needed to ensure that you shouldn’t tire out or even lose your skills 90 minutes or at least 45 minutes. For that sheer hard work would be need to achieve endurance which can be achieved by running non-stop 2 to 3 miles a day. You need to increase your running distance at least by 2 miles after a week so as to be able to run at least 5-6 miles on daily basis.

According to Avram Grant, frequent and continuous practice improve your soccer playing skills while rigorous training will let you achieve much needed endurance. Also make a routine to watch and learn from the finest players in the world and follow their diet, practice, fitness and training routines. In the end, you will become an exceptional soccer player and may join the league of soccer legends.